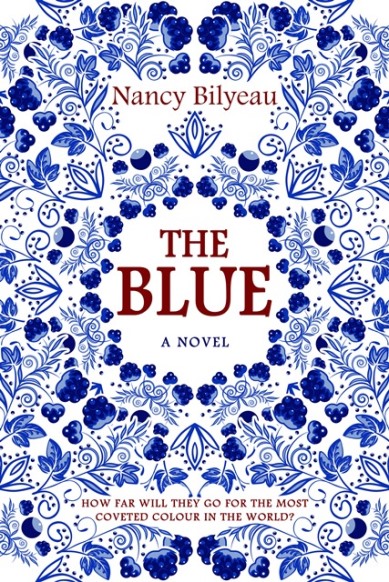 The Blue by Nancy Bilyeau

What would you do to possess the most coveted color in the world? The year is 1758, and a headstrong woman artist, 24-year-old Genevieve Planche, is caught up in a high-stakes race to discover the ultimate color, one that threatens to become as deadly as it is lucrative. When Genevieve’s mission is complicated by her falling in love with the chemist behind the formula, she discovers the world of blue is filled with ruthless men and women and how high the stakes really are. The story sweeps readers from the worlds of the silk-weaving refugees of Londonís Spitalfields and the luxury-obsessed drawing rooms of Grosvenor Square to the porcelain factory of Derby and, finally, magnificent Sevres Porcelain in the shadow of Versailles. And running through it all: the dangerous allure of the color blue.

“Bilyeauís sumptuous tale of mystery and intrigue transports the reader into the heart of the 18th century porcelain tradeówhere the price of beauty was death”í E.M. Powell, author of the Stanton & Barling medieval mystery series.

“Bilyeau deftly weaves extensive historical detail throughout, but the real draw of this suspenseful novel is its juicy blend of lust, murder, conspiracy, and betrayal.” óReview of The Crown published in Oprah, which made the book a pick of the month.

“The story in The Tapestry is fiction, but it is a sheer joy to have Henryís court recreated with an eye to the reality of its venality, rather than the trendy Wolf Hall airbrushing of its violence and rapacity. The tone is always modern and light, but with none of the clumsy thigh-slapping faux period language. Bilyeauís writing is effortless, vivid, gripping and poignant, bringing Tudor England to life with sparkling zest. If you want to see the Reformation from the side of the English people rather than the self-serving court, it is tough to do better than this trilogy.” óReview of The Tapestry by Dominic Selwood, published in The Catholic Herald

“As always, Bilyeau has done her historical homework, bringing the drama, and details of Henry VIIIís court to life. Youíre basically watching the rise and fall of Catherine Howard, Thomas Cromwell, Walter Hungerford and Thomas Culpepper through Joannaís eyes. Her private moments with the king were among my favorites in this book. This a true historical thriller. Itís a Tudor novel full of suspense, intrigue, brutality, and death. Itís a well researched page turner. If youíre looking for an exciting historical read, this will be on your list.” óReview of The Tapestry by Sandra Alvarez for Medievalists.net

ìNancy Bilyeau’s passion for history infuses her books and transports us back to the dangerous world of Tudor England. Vivid characters and gripping plots are at the heart of this wonderful trilogy. Warmly recommended!î óAlison Weir, author of The Marriage Game: A Novel of Queen Elizabeth I and many bestsellers

“Nancy Bilyeau’s polished, inventive debut has all the ingredients of the best historical fiction: a broad cast of characters, well-imagined settings, and vivid story-telling… In Joanna Stafford, Bilyeau has given us a memorable character who is prepared to risk her life to save what she most values, while Stafford’s desperate search for a lost religious relic will satisfy even the most ardent mystery fans.” óDeborah Harkness, author of A Discovery of Witches Nancy Bilyeau has worked on the staffs of InStyle, DuJour, Rolling Stone, Entertainment Weekly, and Good Housekeeping. She is currently a regular contributor to Town & Country and the editor of the digital magazine The Big Thrill. Her screenplays have placed in several prominent industry competitions. Two scripts reached the semi-finalist round of the Nicholl Fellowships of the Academy of Motion Pictures Arts and Sciences.

A native of the Midwest, she earned a bachelor’s degree from the University of Michigan. THE CROWN, her first novel and an Oprah pick, was published in 2012; the sequel, THE CHALICE, followed in 2013. The third in the trilogy, THE TAPESTRY, was published by Touchstone in 2015. The books have also been published by Orion in the UK and seven other countries.

Nancy lives in New York City with her husband and two children.

Wednesday, May 16
Passages to the Past
Clarissa Reads it All
Just One More Chapter
To Read, or Not to Read
Oh, for the Hook of a Book!

Thursday, May 17
Bri’s Book Nook
CelticLady’s Reviews
Kris Waldherr Books
What Is That Book About

Friday, May 18
A Book Geek
The Lit Bitch
Broken Teepee

Saturday, May 19
Books and Glamour
Writing the Renaissance
So Many Books, So Little Time

Monday, May 21
The Maiden’s Court
SilverWoodSketches
View from the Birdhouse

Tuesday, May 22
100 Pages a Day
Bibliophile Reviews
History From a Woman’s Perspective