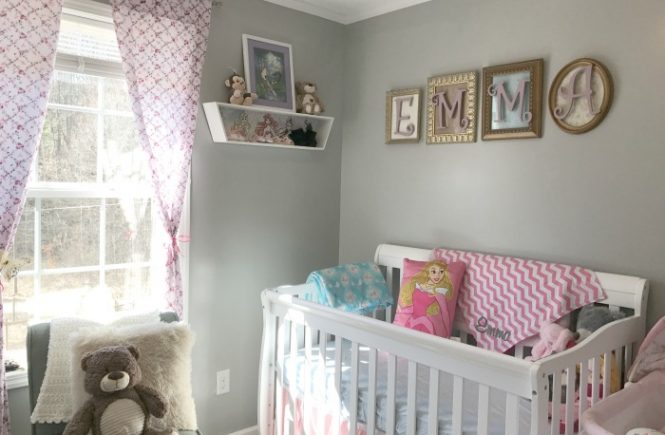 When we found out we were pregnant, we had LITERALLY just moved into our house two weeks before. Emma’s room had originally been a guest bedroom (and it was one of the only rooms that had been completed- so we had to take all of that stuff out and start over). When we found out we were having a little girl, I was surprised because I said during the whole first part of my pregnancy that it was a boy. But I was thrilled! As a girly girl myself, I knew that I wanted Emma’s room to be a subtle nod to my favorite Disney princess, Aurora from Sleeping Beauty. So here is a tour of our baby girl’s room.

The dresser used to be mine. It was old so we had painted it white. Seth bought some pink paint and painted the drawers. He used gold metallic paint to spray paint the knobs, the lamp base, and the mirror.

My Aunt Jean had this diaper castle made for our baby shower. (Isn’t it adorable?!?) Seth made the curtains. (I know!) I had trouble finding some that I really liked. He found this fabric at JoAnn’s and sewed them. I had some pink ribbon lying around so I just used that to tie them back. The golden butterfly is an ornament that Mimi (Seth’s mom) put in Emma’s stocking. I wanted to display it because it just looks like it came from a fairy tale.

My mom got us the crib and the bassinet. (I believe it is also from Wal-Mart.) And holy wrinkled sheets, Batman! I need to throw them back in the dryer!!! One thing I desperately wanted in Emma’s room were some shelves to display her books. We looked at some from Target, but Seth decided to make his own and save us a bit of money. If you want to see how Seth built these shelves, check that out here. I hung my old childhood books on there. (I was a little obsessed with ancient Egypt. I hope Emma likes them.)

This is by far my most favorite part of Emma’s room! I saw an example of this on Pinterest and wanted to replicate it SOOO BAD! So my friend, Sarah, and I went to Goodwill and bought antique looking frames. We picked up some scrapbook paper and wooden letters from JoAnn’s. (We got a bunch of different colors of scrapbook paper. We wasn’t exactly sure what look we were going for.) Literally, all we had to do was paint the letters, put the scrapbook paper inside the frames (we did have to trim the paper down very carefully). Then we used a hot glue gun to glue the letters onto the top of the glass. Viola!

Have I mentioned how dang hard it was to find anything with Aurora on it???? The picture was found by luck at a Goodwill. LUCK! As for the shelf- thank goodness for Hobby Lobby! The shelf was discounted and I was so happy that Aurora was actually ON it. I just put some of her cute shoes on there just to add a little something. (Seriously, how cute are those little black booties!)

Let me know if you have any questions about anything.