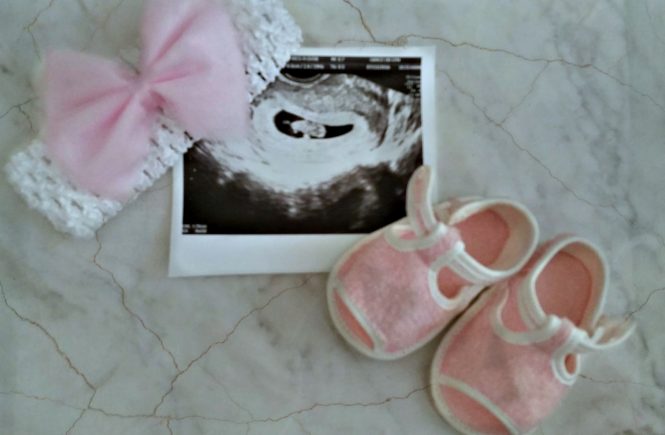 It was definitely not something we were expecting. Everything had been so crazy. We were building a house and I had decided to change jobs. We were finally able to move in the first of June, setting in a whole new level of stress. So when Mother Nature hadn’t ran her course yet, I thought it was no big. Even as I stood in the line at Target holding a pregnancy test, I was convinced there was no possible way. The cashier rang me up, smiling at me from ear to ear. “I hope it’s a girl!” She exclaimed. I smiled awkwardly, thinking to myself that I hadn’t even taken the dang thing yet.

Peeing on a stick is awkward in itself, but as I undid the wrapper my husband sat down on the tub, holding Wallie (our malshi).

“What are you doing?” I asked.

“This is a family event.” Seth said.

Yeah right. I ushered the two of them out of the bathroom, did my thing, and sat the test on the countertop for the longest three minutes of my life. They say a watched pot never boils. I’m convinced watching a pregnancy test works the same way. Seth and I both waited with anticipation. Slowly the first pink line appeared. We waited and waited. “Maybe my period is just late.” I exclaimed, thinking that was that. But as I spoke, the second pink line began to show but ever so faintly.

I panicked, convinced myself that the line had to be darker and took the other test in the box. The pink line came through bright as day.

There are so many emotions when you finally accept that there is life growing inside of you. For me it wasn’t real until we went in for our first ultrasound. Hearing her heartbeat and seeing her on the screen- even though she looked like a little bean- was overwhelming. (Yes, it is a girl!) My life was going to be different from now on. Suddenly nothing else seemed to matter.

Now as I sit writing this, I literally have 33 days until our due date. It has been the longest nine months of my life. They have been filled with nausea, aches and pains, weird food cravings, and mood swings. I have bombarded my mom and sister-in-law with weird questions. I have overloaded Google with searches on symptoms (at times convincing myself that my baby will be born with two heads). I’ve had terrible dreams: one that I drop her as soon as the doctor hands her to me. The other: that she will call Seth “mom” and want him more since I can’t stay home with her after maternity leave is over. Pregnancy is no walk in the park! But when Seth and I get to hear her heartbeat or when I feel her move, I know that this journey- though not expected- has been such a blessing.