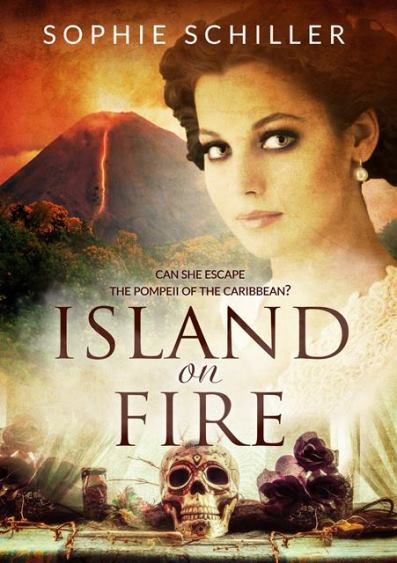 Island on Fire
by Sophie Schiller

In the lush, tropical world of Martinique where slavery is a distant memory and voodoo holds sway, Emilie Dujon discovers that her fiancÈ, a rich sugar planter, has been unfaithful. Desperate to leave him, she elicits the aid of a voodoo witch doctor and is lured into a shadowy world of black magic and extortion. When the volcano known as Mount PelÈe begins to rumble and spew ash, she joins a scientific committee sent to investigate the crater. During the journey she meets Lt. Denis RÈmy, an army officer with a mysterious past. At the summit, the explorers discover that a second crater has formed and the volcano appears to be on the verge of eruption. But when they try to warn the governor, he orders them to bury the evidence for fear of upsetting the upcoming election. As the pressure builds, a deadly mudslide inundates Emilieís plantation and she disappears. With ash and cinders raining down, chaos ensues. Left with no choice, Lt. RÈmy deserts his post and sets off on a desperate quest to rescue Emilie. But with all roads blocked, can they escape the doomed Pompeii of the Caribbean before itís too late?

The city of Saint-Pierre was in a joyous mood.

This book interested me for one huge reason- Mount Pelee. It’s a historical tale we’ve heard many times- like Mount Vesuvius. There’s something about volcanoes that intrigues me, and I’ve only read one book that dived into the how, what, why of a famous eruption. (This is where I shamelessly promote A Day of Fire by several talented historical authors.) So I was very excited to receive a copy of Island of Fire that would bring to life the eruption of Mount Pelee.

Emilie Dujon finds out that her fiancé is being unfaithful. She is desperate to leave, so like any normal woman- she employs the help of a voodoo witch doctor. (We’ve all been there, darling.) She ends up getting involved with a lot of black magic. When Mount Pelee begins to show signs that it’s going to blow, she goes with scientific team to investigate the crater. She meets a Lieutenant just in time for the volcano to erupt in all of its fury. What ensues is a quest for Lt. Remy to rescue Emilie, but is survival possible?

This book took me some effort to get into. I loved the idea of it, but it moved slow in the beginning. The story did pick up and kept me flipping the pages, wondering what was going to happen next. I mean, can they really survive a volcano eruption? If you enjoy unique, well researched historical fiction I think you will really enjoy this one. Sophie Schiller was born in Paterson, NJ and grew up in the West Indies. She loves stories that carry the reader back in time to exotic and far-flung locations. Kirkus Reviews called her “an accomplished thriller and historical adventure writerî. Her latest novel is Island on Fire, a thriller about the worst volcanic disaster of the 20th century. She was educated at American University, Washington, DC and lives in Brooklyn, NY.

Thursday, August 9
Review at History From a Woman’s Perspective

Friday, August 10
Feature at Books and Wine are Lovely

Saturday, August 11
Interview at Passages to the Past

Monday, August 13
Review at What Cathy Read Next

Tuesday, August 14
Review & Excerpt at Clarissa Reads it All

During the Blog Tour we will be giving away a copy of Island on Fire to one lucky reader! To enter, please enter via the Gleam form below.

ñ Giveaway ends at 11:59pm EST on August 14th. You must be 18 or older to enter.
ñ Giveaway is open to US residents only.
ñ Only one entry per household.
ñ All giveaway entrants agree to be honest and not cheat the systems; any suspect of fraud is decided upon by blog/site owner and the sponsor, and entrants may be disqualified at our discretion.
ñ Winner has 48 hours to claim prize or new winner is chosen.