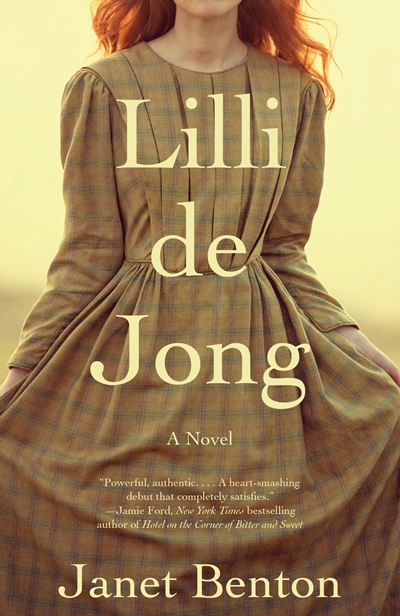 Philadelphia, 1883. Twenty-three-year-old Lilli de Jong is pregnant and aloneóabandoned by her lover and banished from her Quaker home. She gives birth at a charity for wronged women, planning to give up the baby. But the power of their bond sets her on a completely unexpected path. Unwed mothers in 1883 face staggering prejudice, yet Lilli refuses to give up her baby girl. Instead, she braves moral condemnation and financial ruin in a quest to keep the two of them alive.

Lilli confides this story to her diary as it unfolds, taking readers from a charity for unwed mothers to a wealthy familyís home and onto the streets of a burgeoning American city. Her story offers a rare and harrowing view into a time when a motherís milk is crucial for infant survival. Written with startling intimacy and compassion, this accomplished novel is both a rich historical depiction and a testament to the saving force of a womanís love.

Some moments set my heart on fire, and that’s when language seems the smallest.

Lilli de Jong is a twenty three year old single woman who is pregnant and has been banished from her Quaker home. Her lover has abandoned her and she’s forced to give birth at a charity for wronged women. In a time when unwed mothers faced horrible scrutiny, Lille cannot give up her daughter like she is supposed to. Through prejudice, condemnation, and financial issues, Lille does what she can to keep her daughter and herself alive.

I don’t know if I would have had the same emotional attachment to this book if I wasn’t a mother. Everyone says there is no love like a mother’s love, but until you experience it for yourself you don’t understand. This book had me sobbing uncontrollably (not a difficult feat. I’ve always been a cryer). I can’t even imagine the struggles Lille went through in such a time when you were condemned for having a child out of wedlock, not to mention the part that religion would have played. This book was deeply moving and had me racing through to the end. Truly a superb novel. I can’t wait to read more of Janet Benton’s work. Five stars!!!!!

-I loved this novel. Itís deeply moving and richly imagined, both tragic and joyous. -Sandra Gulland, author of the internationally bestselling Josephine B. Trilogy

-A captivating, page-turning, and well-researched novel about the power of a motherís love .-Library Journal (starred review)

-A confident debut . . . Sentence by carefully-crafted sentence, Benton ensnares the reader. -The Millions

-Benton combines rich, carefully researched detail with an imaginative boldness that is a joy to behold. -Valerie Martin, author of The Ghost of the Mary Celeste

-This is both a super lush historical novel and an amazing feminist manifesto. Buy it for everyone.-Book Riot

-You would be hard-pressed to find a more intimate, even revolutionary depiction of the emotional and sensory experiences of motherhood. -UMass Magazine

-A brilliantly quiet novel with a spine of steel.-Read It Forward

-[What a] monumental accomplishment the novel achieves. . . . Benton holds a mirror up to the past and in doing so, illustrates how far we have come as well as how far we have yet to go. -Kirkus Reviews

JANET BENTONís work has appeared in The New York Times, The Philadelphia Inquirer, Glimmer Train, and many other publications. She has cowritten and edited historical documentaries for television. She holds a B.A. in religious studies from Oberlin College and an M.F.A. in creative writing from the University of Massachusetts, Amherst. For decades she has taught writing at universities and privately and has helped individuals and organizations craft their stories. She lives in Philadelphia with her husband and daughter. Lilli de Jong is her first novel.

Monday, August 20
Feature at Clarissa Reads it All

Thursday, August 23
Feature at Beth’s Book Nook Blog
Feature at What Is That Book About

Friday, August 31
Guest Post at Passages to the Past

During the Blog Tour we will be giving away a copy of Lilli de Jong to one lucky reader! To enter, please enter via the Gleam form below.

ñ Giveaway ends at 11:59pm EST on September 13th. You must be 18 or older to enter.
ñ Giveaway is open to US residents only.
ñ Only one entry per household.
ñ All giveaway entrants agree to be honest and not cheat the systems; any suspect of fraud is decided upon by blog/site owner and the sponsor, and entrants may be disqualified at our discretion.
ñ Winner has 48 hours to claim prize or new winner is chosen.