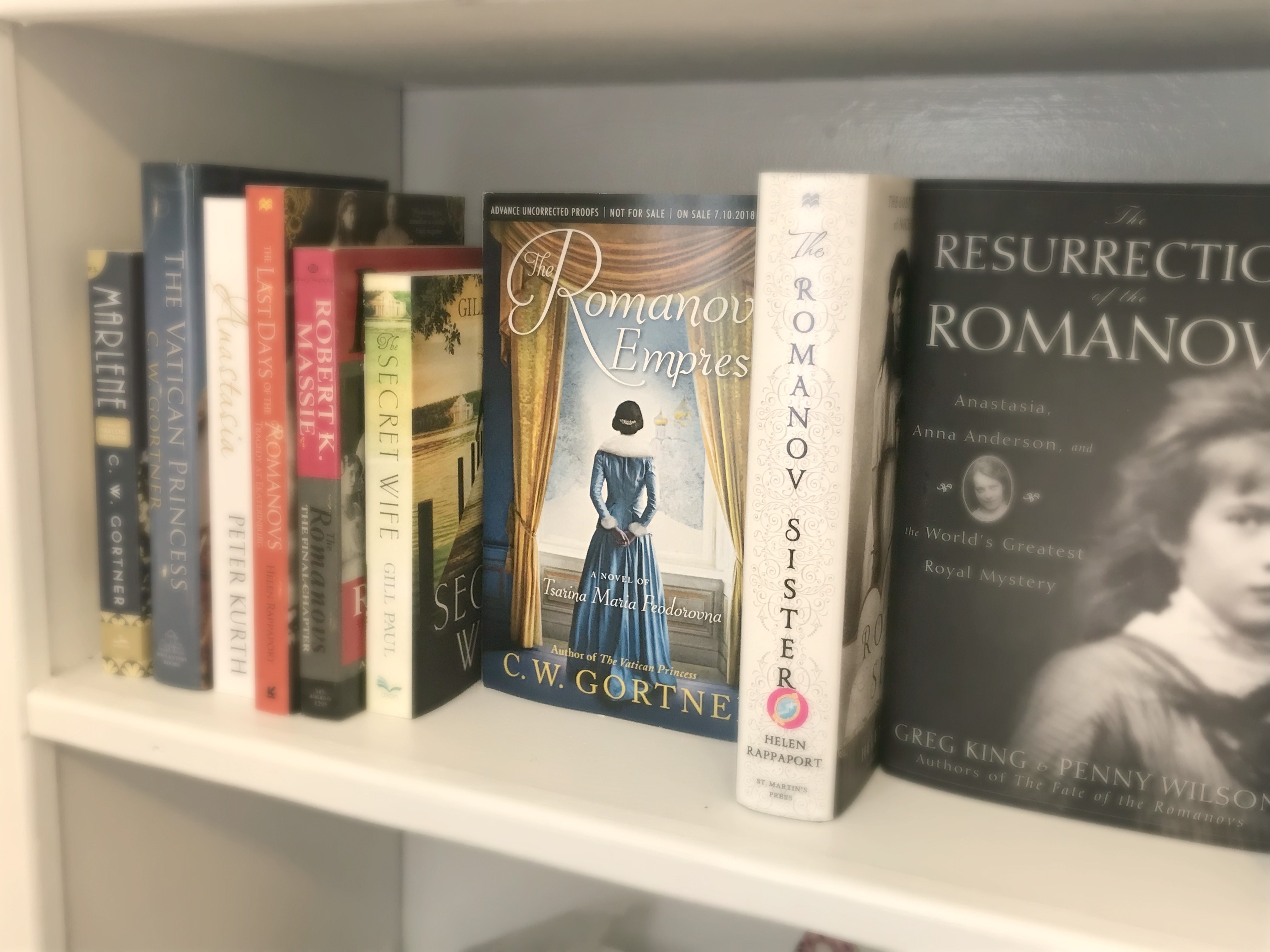 The Romanov Empress
by C.W. Gortner

Even from behind the throne, a woman can rule.

Narrated by the mother of Russiaís last tsar, this vivid, historically authentic novel brings to life the courageous story of Maria Feodorovna, one of Imperial Russiaís most compelling women, who witnessed the splendor and tragic downfall of the Romanovs as she fought to save her dynasty in the final years of its long reign.

Barely nineteen, Minnie knows that her station in life as a Danish princess is to leave her family and enter into a royal marriageóas her older sister Alix has done, moving to England to wed Queen Victoriaís eldest son. The winds of fortune bring Minnie to Russia, where she marries the Romanov heir and becomes empress once he ascends the throne. When resistance to her husbandís reign strikes at the heart of her family and the tsar sets out to crush all who oppose him, Minnieónow called Mariaómust tread a perilous path of compromise in a country she has come to love.

Her husbandís death leaves their son Nicholas II as the inexperienced ruler of a deeply divided and crumbling empire. Determined to guide him to reforms that will bring Russia into the modern age, Maria faces implacable opposition from Nicholasís strong-willed wife, Alexandra, whose fervor has lead her into a disturbing relationship with a mystic named Rasputin. As the unstoppable wave of revolution rises anew to engulf Russia, Maria will face her most dangerous challenge and her greatest heartache.

From the opulent palaces of St. Petersburg and the intrigue-laced salons of the aristocracy to the World War I battlefields and the bloodied countryside occupied by the Bolsheviks, C. W. Gortner sweeps us into the anarchic fall of an empire and the complex, bold heart of the woman who tried to save it.

“We should dress alike,” I said on that afternoon when life changed forever.

As a girl that grew up in the nineties, I was obsessed with the Dreamworks movie Anastasia. First of all, if you’ve never seen the movie, shame on you! The movie is such a beautifully animated film following orphaned Anya who is trying to get to Paris because she has some clues she has family there. Plot twist. She ends up being the lost Grand Duchess Anastasia and is reunited with her Grandmama all while thwarting the evil Rasputin, who is hell bent on carrying out the curse of the Romanovs. Sadly, animated films are never historically accurate which crushed me when I became older. Turns out the end of the Romanovs- including Anastasia- was a very devastating time in history and lacked the glimmer of hope that the Dreamworks film instilled in us. With that being said, the only knowledge I had of Maria Feodorovna was that she was once the Empress of Imperial Russia, the mother of the last tsar, and the old woman who lived in Paris who was desperately searching for Anastasia (sadly that last part is not accurate). When I saw that C.W. Gortner was tackling this woman in his upcoming novel, the ten year old girl in me squealed with delight. C.W. Gortner is such a fantastic writer and I’ve scooped up everything he’s written. (My favorite is his novel about Lucrezia Borgia. Check it out.) So I couldn’t wait to get my hands on it. So, thank you for the advanced copy!!! I seriously fan-girled that I was able to get my hands on this book early.

Okay! Enough gushing! I will get into the review.

The Romanov Empress follows Minnie, as she is called, in her journey as a Danish princess to the Russian throne. As is Gortner’s style, he leaves no stone unturned, covering Minnie’s long life. She witnesses the early days of Russias troubles first hand, as assassins threaten the royal families life, as she deals with the loss of many people close to her, and experiences the ultimate end of Imperial Russia as we know it. I was fascinated that Gortner chose Minnie to narrate the story. There were so many key historical figures he could have chosen- such as any of the Romanov family who is eventually assassinated. By choosing Minnie, I felt like the story of the Romanovs seemed complete. Through Minnie’s eyes, the fate of the Romanovs seemed almost inevitable. The death of Minnie’s husband leaves their very inexperienced son the Russian throne- the nail in the Romanov coffin. Minnie witnesses many key players, including the famous Rasputin who has become a confidant of her daughter-in-law. The relationship with Minnie and Alexandra was the most interesting to me. I had the sense that Minnie very much disliked her daughter-in-law as she recounted the gossip that was spreading through Russia.

I adored this book! Gortner did such amazing research and I was never bored of the story. His writing was superb! There’s some books you read, but there are some books that while reading you feel as if you are watching everything play out right in front of you- and that is how I felt with this book. I was whirled into Imperial Russia. I stood on the staircase as assassins bombed it. I was watching as the tsar took his last breath. I witnessed the height and fall of the Romanovs- and it was quite a ride!

Thank you again to C.W. Gortner and Amy at Historical Fiction Virtual Book Tour for allowing me to read this book. Mr. Gortner, I would read anything you wrote- including your grocery list!

Praise for The Romanov Empress

“Gortnerís mesmerizing historical novel (following The Vatican Princess) depicts the remarkable life of the mother of the last Russian tsar. This insightful first-person account of the downfall of the Romanov rule will appeal to history buffs; at its core, itís the powerful story of a mother trying to save her family and an aristocrat fighting to maintain rule in a country of rebellion, giving it an even broader appeal.” óPublishers Weekly

ìThe Romanov Empress has all the glitter and mystery of a Faberge egg, the outer decadence and beauty of Imperial Russia unfolding to reveal the mysteries and horrors within. The waning days of a doomed dynasty are recounted by the vivacious but tough Danish princess who would become one of Russia’s most revered tsarinas, only to see her line end in war and revolution. Gortner pens a beautiful tribute to a lost world, weaving a tale sumptuous as a Russian sable.î óKate Quinn, New York Times bestselling author of The Alice Network

ìA vivid, engaging tale of Tsarina Maria Feodorovna, the mother of Russia’s last Tsar, her loves and her heartbreaks, bringing the troubled final decades of the Russian Empire to life.î óEva Stachniak, author of The Winter Palace C. W. Gortner holds an MFA in writing, with an emphasis on historical studies, from the New College of California. He is the internationally acclaimed and bestselling author of Mademoiselle Chanel, The Queenís Vow, The Confessions of Catherine de Medici, The Last Queen, The Vatican Princess, and Marlene, among other books. He divides his time between Northern California and Antigua, Guatemala.

Tuesday, July 10
Review & Interview at Clarissa Reads it All
Feature at Passages to the Past

Wednesday, July 18
Review at Creating Herstory
Feature at So Many Books, So Little Time

Wednesday, July 25
Review at History From a Woman’s Perspective

Tuesday, July 31
Review at Oh, for the Hook of a Book!

Thursday, August 2
Review at Curling Up By the Fire

Tuesday, August 7
Review at What Cathy Read Next

Friday, August 10
Review at Two Gals and a Book

During the Blog Tour we will be giving away a copy of The Romanov Empress to one lucky reader! To enter, please enter via the Gleam form below.

ñ Giveaway ends at 11:59pm EST on August 10th. You must be 18 or older to enter.
ñ Giveaway is open to US residents only.
ñ Only one entry per household.