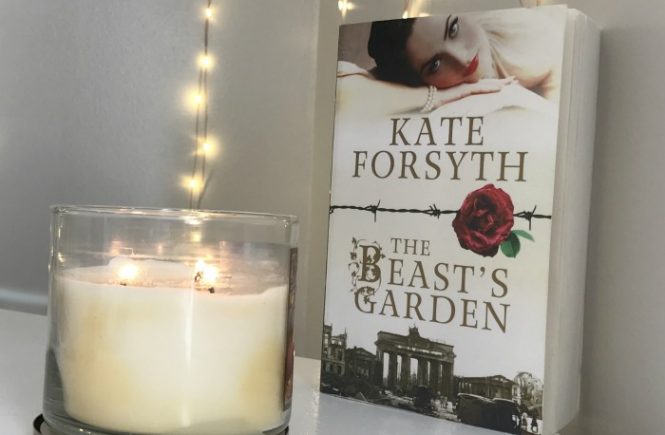 I LOVE fairy tale retellings! So when I heard that Kate Forsyth (the master of fairytale retellings) was writing a book based on Beauty and the Beast set in Nazi Germany, I knew I had to get hold it. It was a task attempting to get hold of this book since it was only released in Australia, but my husband finally managed! (Thank goodness!) If you live in the states, you can purchase it as an audiobook.

The novel opens as the founding blocks for World War II are being laid out. Ava and her family are not supporters of Hitler (with the exception of Ava’s sister). They are close to a Jewish family, which is what prompts Ava to be out on the streets during the Night of Broken Glass. This is when she meets Leo, a Nazi officer who works for Hitler’s spy chief. The two become instantly enamored with each other, but Ava fears him and loathes the Nazis. When her father is taking by the Gestapo for sending some letters with classified information, Ava turns to Leo for help. Leo helps get Ava’s father out of the country, and in turn, Ava marries him. Despite her marriage, Ava continues to work against the Nazi regime as World War II ignites. She uses her position as Leo’s wife to pass on information. But even as she is spying on her husband, she finds herself falling in love with him. She also discovers that he is not what he seems. He is working with a group to assassinate Hitler. When he is found out, it is up to Ava to rescue her husband and get them both out of Germany.

I feel this was wrongly advertised as a Beauty and the Beast retelling. It is actually based on the Singing, Springing Lark– a much more intricate fairytale. Despite this fact, the book is very engaging. It takes you through Nazi Germany in several different views: from Ava’s, to her Jewish friends who are either working with the resistance or in a concentration camp, to Leo’s who is planning an assassination attempt. Forsyth doesn’t skate over the Holocaust. There are some scenes that are rather difficult to read as she describes the atrocities. But she writes these scenes with such emotion and depth.

Ava is very similar to Disney’s Belle. She thinks for herself and refuses to be a damsel in distress. I loved how despite her father having to leave the country in order to save himself from the Nazis, she was still willing to do what she could to fight against them. She definitely proved that in the end when she does whatever is necessary to save her husband from execution.

Leo, though I knew he was a Nazi, was likeable. You could definitely tell he wasn’t like the others. His character also shed light on the dilemma faced in Nazi Germany at this time. As a sworn officer in the army, to turn his back on all of that was to throw away his honor. Meeting Leo’s family and learning about his past made you sympathize with him. Not all Germans wanted to support Hitler. Many just didn’t want to lose their lives themselves.

The beginning of Ava and Leo’s relationship was almost enough to make me want to put the book down. It was definitely a case of “insta-love”. Some of their dialogue was also un-relatable or just plain ridiculous. For instant, Leo says at one time to Ava, “I’m so in lust with you.” (Uh…bye Felicia.) Ava also is far to open with him in their first meeting, pretty much saying she is not a fan of Hitler. (Hello, Ava! We’re in a war here! Be careful what you say to people. Especially a Nazi officer! Talk about ballsy!) Eventually, Ava and Leo’s relationship seemed to grow some depth and I enjoyed watching them get to know the other. (Leo’s pick up lines definitely got better!)

When I started reading the reviews on this book, A LOT of people were upset that it was about falling in love with a Nazi. I was disappointed that based on that fact alone, people either hated the book or refused to read it. I thought Forsyth did an excellent job bringing each person and their situation to life. World War II is remembered for being one of the worst wars- especially seeing the horrors that the Nazis undertook in. It’s almost hard to imagine. Never did she condone what the Nazis did and as Leo slowly began to uncover the truth, you can see his shift in loyalty. He was deeply distraught by the atrocities. I do feel like this would have been better without the fairytale aspect. I can see how having a Nazi be the representation of the Beast would cause many to feel that this was an attempt to romanticize the Nazis.

Forsyth definitely did her research on the subject! But there was also SO MUCH going on in this novel. You saw Unity Mitford, the inside of Buchenwald, the forbidden art of jazz, and even a glimpse into the Valkyrie (made famous by Tom Cruise’s movie). I almost thought it was to much- like every aspect of this time was incorporated.

If you want a Beauty and the Beast retelling, this is probably not what you are looking for. It is, however, a wonderful piece of historical fiction that gives us a glimpse into Berlin during Nazi Germany.

If you’ve read this book, what did you think? Let’s chat in the comments.