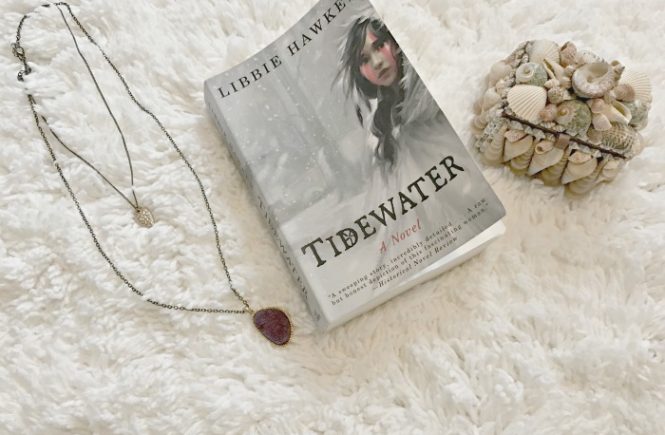 I remember when Disney’s Pocahontas came out. I was six and we saw it in theatres. It was epic! But then something terrible happened- Pocahontas 2 came out! (Why do they insist on making sequels for amazing movies? Leave them alone!) As a history nerd, I get it. The history wasn’t entirely accurate- but finding out Pocahontas and John Smith never actually end up together made me want to puke. I say all of this because I don’t think anyone thinks of the Indian princess without also thinking about her “painting with all of the colors of the wind”. Who was Pocahontas really? Enter Libbie Hawker- author of Tidewater, who asked herself that very question.

(Warning: If you want a novel where Pocahontas and John Smith fall in love- this is not that novel. I know. It’s hard to process. Stupid Disney!)

The novel opens by introducing the legendary John Smith, who is traveling with other colonists to what will eventually be called Virginia. There the colonists set up Jamestown Colony. Smith isn’t exactly popular among the crew. Yet, he is bent on making sure the colonists survive in this new land that they know NOTHING about! To be sure that the colonists don’t starve to death, John Smith turns to the Powhatan tribe. This tribe of Native Americans aren’t exactly fans of the Colonists. I mean, they just showed up, invaded their land, and now they want food. Chief Powhatan- who is far from the wise old man we see in the Disney movie- is only interested in one thing. He wants to possess guns so he can conquer his enemies. He employs his favorite daughter, Pocahontas, to learn the white man’s language in hopes that he will be able to get what he wants. Powhatan’s brother, Opechancanough (good luck pronouncing that), has plans of his own. He thinks the Colonists are dangerous and wants to destroy them- not befriend them. He think Powhatan is growing old and weak. Basically, he wants to be chief. Both the Powhatan tribe and the Colonists struggle to coexist, maintain their way of life, and get what they want- but alas, this can’t happen. So begins the very repetitive cycle: fight, trade, fight, trade, fight. Pocahontas has to chose whether she will stand with her people or if she will try to bridge the gap between the group.

I was immediately drawn to this book when I saw it was discounted on Amazon. I had never seen a book about Pocahontas before and had heard some amazing things on Hawker’s writing. It was slow moving for me at first. The book is written in three point of views: John Smith, Opechancanough, and Pocahontas. I could have cared less about John Smith or Pocahontas’ uncle. I understand why their views were introduced though. Both men had ambitions that conflicted with the other, making it pretty clear that these two groups of people could not coexist. But I mean really- I bought this book to learn about Pocahontas- why was she coming off as a minor character? When Pocahontas is introduced, she is much younger than her Disney self. She is a child and in no way, shape, or form considered a princess. (She is only a minor daughter of Powhatan.) She does have ambitions of her own. She wants to be a chief one day, but because of her mother’s low status will never be able to achieve such positions. For a child, she is intelligent beyond her years. She takes it upon herself to save John Smith from certain death for her own personal gain. Eventually, she finds herself betrayed by her own people and forced to live among the Colonists.

The showdown with the Indians and the Colonists got so repetitive. Do you want to be friends or kill each other? Make a decision!  Hawker really is an amazing author. Her writing is full of descriptions and she definitely did her research into the Powhatan tribe. I felt like I got a sense of the way they looked and some of their customs.

I was not in love with this book. I felt like the book began to drag and it just wasn’t for me. The ending did make up for it. I was glad when the two male point of views were over so I could get back to Pocahontas.

Have you read this book? What did you think? Let’s chat in the comments! 🙂